We’ve been here a full week! It feels both quick and long all at the same time. In many ways, it feels like vacation. Swimming in the condo pool each day, eating out too much and visiting some of the sights. In between getting settled and the constant grocery shopping (the kids say every time, again?!?) we’ve been pretty busy. Since this might get long, we’ll just talk about Tuesday in this post.

On Tuesday morning we had a visit on our balcony from some local wildlife, a cockatoo. My mom is convinced it was escaped, but as it flew in a pack of 3, I’m pretty sure they were wild. They haven’t returned yet but we anxiously await and hope they don’t enter open balcony doors 😬.

Tuesday was also a big morning as we went to MOM (ministry of manpower) and became official residents of Singapore! Immigration in Singapore is tied to employment. So there were no embassy visits for us before we left the US. Basically, Ryan’s company submitted a form that stated that he was employed here in Singapore. They then issued him what’s called an EP (employment pass) card which is his immigration status. The kids and I are a DP (dependent pass) which is based on Ryan’s EP. Our status means we are residents of Singapore, but our children are not immediately eligible to attend the local schools (they would have to pass a difficult test and then be entered into a lottery for school location which could be anywhere on the island) and Liam when he turns 18 does not have to serve in the military as all male Singaporeans between ages 18-20 do. We are also not eligible for local housing (called HDB). All of this is fine as we are only here for 2 years and Ryan’s company has us here on an expat package.

After MOM (which only took 20 minutes, love Singaporean efficiency) the kids and I walked along boat quay to go see the Merlion.

The Merlion is in Marina bay (across from the marina bay sands hotel with the “boat” on top) and is the symbol of Singapore. It’s kind of silly that a lion is the symbol at all since there never were wild lions in Singapore (there were tigers, but not anymore thankfully). Once upon a time one of the many peoples that occupied Singapore claimed there were lions and it stuck. We did not take a picture trying to catch the water in our mouth but watching others try to take that picture is hilarious.

After that, it was time for a juice! 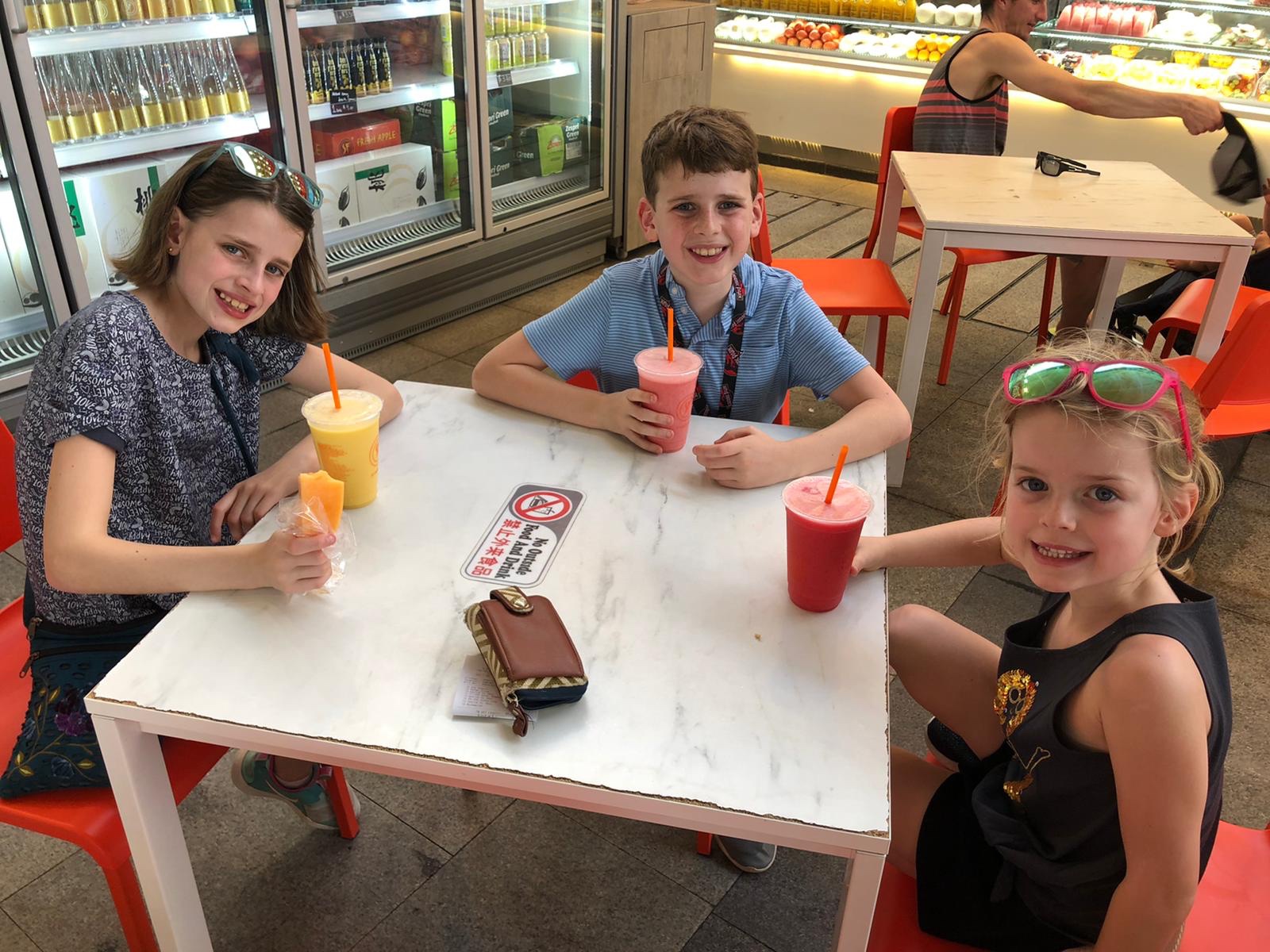 Better flavor selections this time, all were consumed!

Ella really wanted to buy a plant for our balcony, so we headed back toward home to the Tiong Bahru wet market and hawker center. 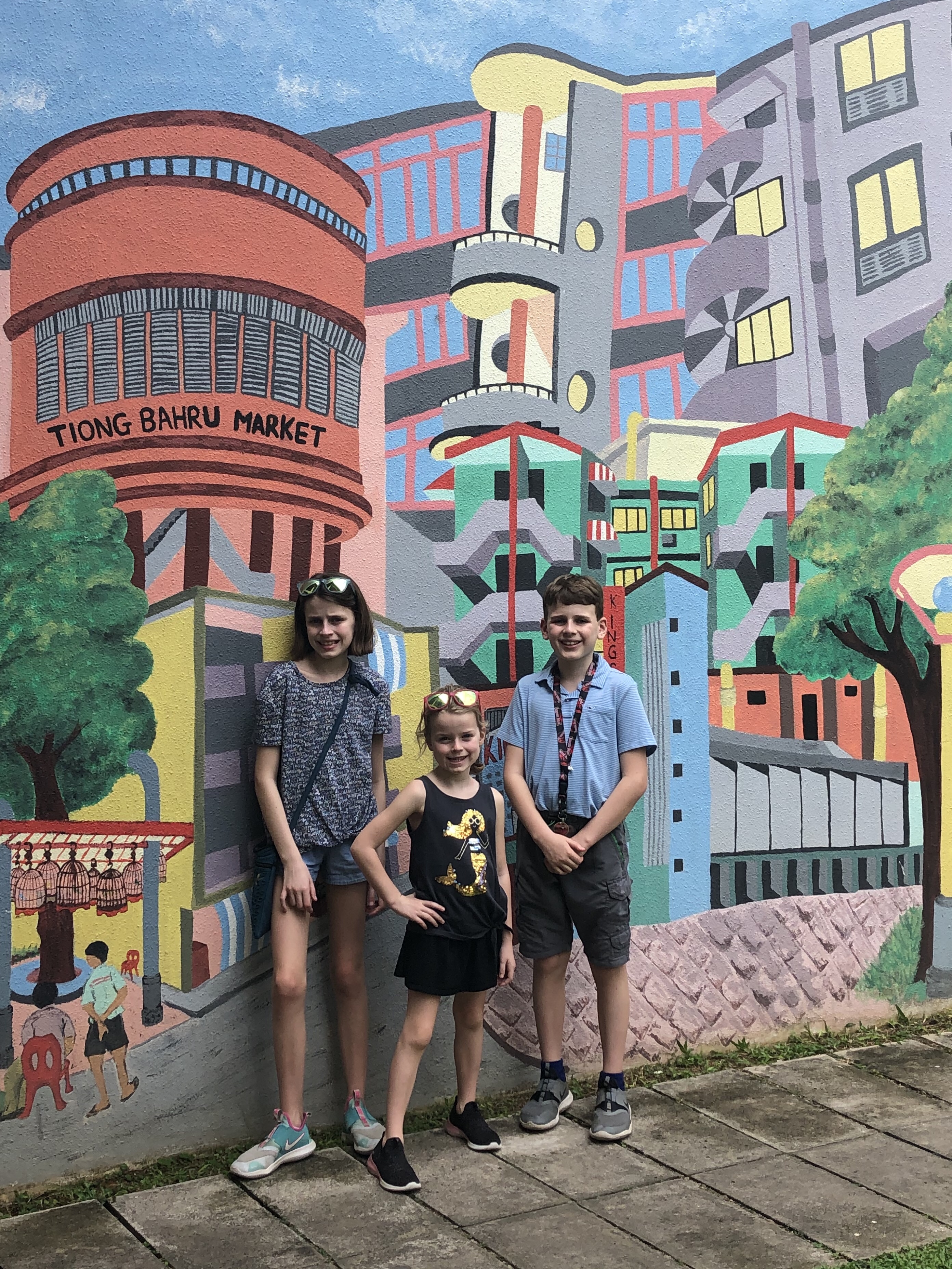 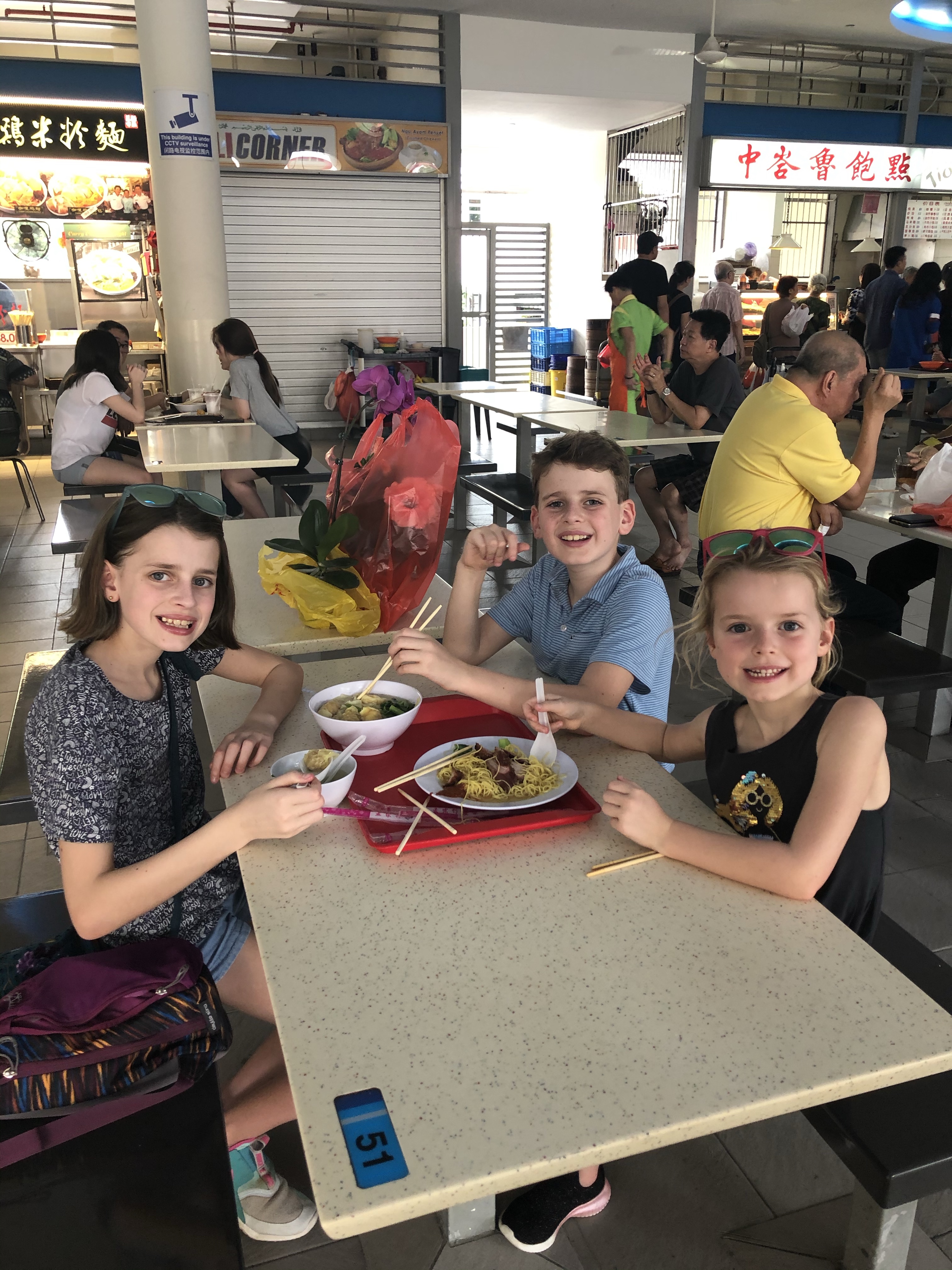 Yes, Avery is using 4 chopsticks. No forks at this hawker. The other thing they never have is napkins (they do have wash basins and Singaporeans will wash their hands before and after they eat). Most people carry a pack of tissues which you can use to “chope” your table. Chope means to save. If you leave anything on a table (a pack of tissues, a water bottle, your cell phone) you have chope-ed it and no one will sit there, move or steal your stuff. Being a one time New Yorker, I don’t think I will ever accept the lack of crime here.

After that we walked around Tiong Bahru in search of ice cream (no Singaporean ice cream vendor. Bummer!). We found a store that was cat themed and a very good, fancy ice cream store next door. While the girls and I got very small one scoop cones, Liam got this:

Finally home for a rest and swim. That night we went to the uniform store which was such a whirlwind that I took no pictures!

40 something wife, mom, reader, hiker, baker and dreamer. View all posts by erinjm82